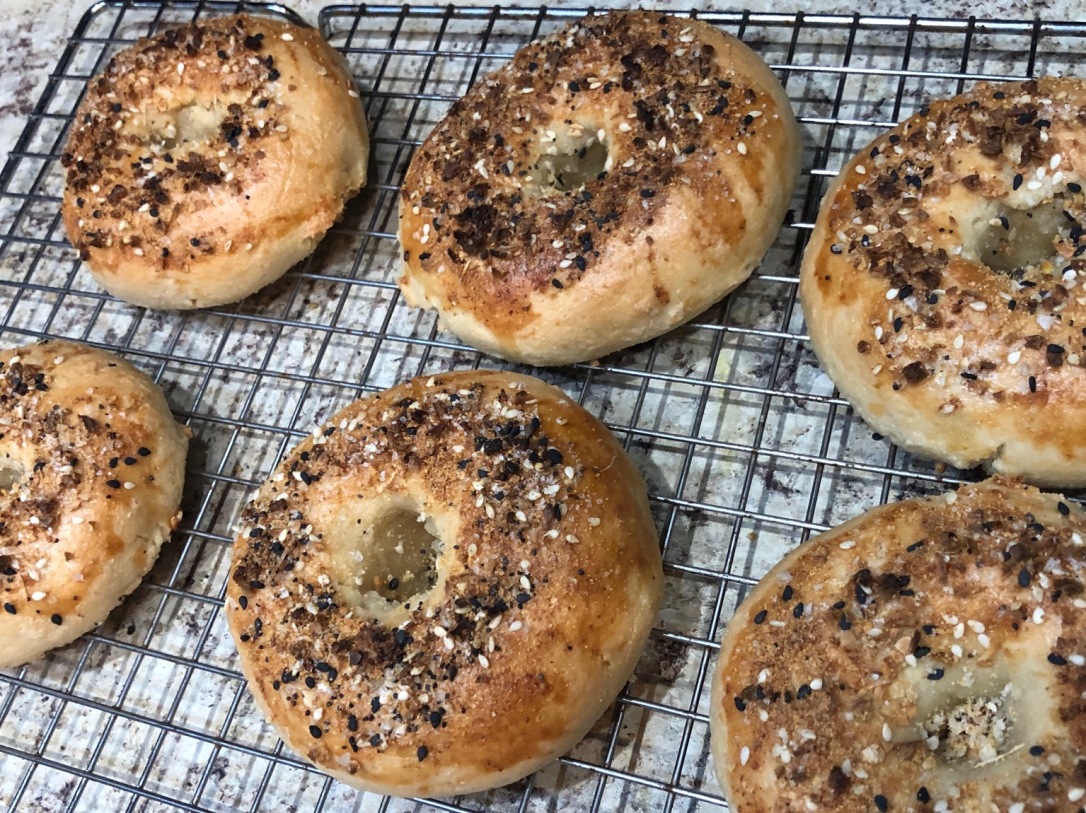 I’m a Yankee in the South. A New Yorker to be exact. If anyone knows a good bagel, it’s me. And gawd is it hard to find a good bagel down here.

Not only have I yet to find a decent bagel here in the South that’s comparable to what I grew up eating, but now I don’t eat gluten anymore, and my youngest child isn’t supposed to have any grains or animal product whatsoever. How’s THAT for a dietary challenge?!

We live in a day and age where gluten-free vegan options abound, but GRAIN-free? That’s just … ugh. Virtually impossible to find in a store, so we buy some really out-there ingredients and do a looooot of experimental baking in our house these days.

Why is my youngest child grain-free, you might wonder? Our amazing pediatrician Dr. Franz is a Western MD, a homeopath, and a believer in TCM, Traditional Chinese Medicine. Her treatments are based on Chinese Five Element Theory, which posits that there are five different elements or body types that require five different ways of eating. Should you decide you are intrigued enough to have your body type analysis done, you can go here and consult with a Chinese doctor via Skype, which is what I did.

In my household, there are not one, not two, but three different types with vastly different food needs among us. Fun times.

So basically, my Water type is the one who is hardest to feed. And she also happens to be the pickiest eater. If she could eat chicken nuggets and mac and cheese every day, she’d be happy as a clam. But no animal and no grain means no chicken, no breading on the nuggets, no regular pasta, and no cheese. Not that I’d want her eating that stuff anyway.

So I have been testing out all kinds of grain-free flour options: almond, tapioca, corn (it’s considered a seed, not a grain … hallelujah!), potato, coconut, and so on. Several recent experiments with a combination of almond flour and tapioca starch as the base flour mix have actually been rather successful, including this one, inspired by a recipe in the cookbook Without Grain. I made a few changes to make it suitable for Water type (I subbed maple syrup for honey because honey is from an animal, and I subbed agave syrup and water for the egg yolk glaze because again, no animal).

So here you have it. A fairly decent grain-free vegan bagel that even the pickiest eater totally devoured, after it was toasted and spread with vegan cream cheese.

Then she asked for a second one. Thank goodness. Success!

Boiling the bagels absolutely gave them that authentic chewy bagel texture, though once they were cooled enough to cut them in half to toast, I did think they were still a little too sticky inside. I gave them a nice long cycle in the toaster, and it helped.

Fire child had hers with regular organic dairy cream cheese while Water child had vegan cream cheese. I had mine with Miyoko’s vegan butter. The kids both thought these bagels were totally fantastic, but next time I make these, I will increase the baking time at 350 from 20 minutes to 25 or 30, before increasing the heat to 425, to address the sticky factor. Stay tuned for the update here once I try this.

It may be a little while though, because during this holiday season, I’ve got a grain-free sugar cookie recipe I need to test out next with vegan egg replacer instead of the one egg that’s called for. No rest for the weary when it comes to grain-free vegan requirements! Will share that recipe here too, when it’s ready.

Meanwhile, happy holidays (and happy special-needs baking) to all and to all a good night!

Life coach, yoga teacher, natural living consultant, and all around ecomama in Orlando, FL, ready to teach you how to live cleaner and greener, find mental and physical balance, and light your innerglow. View all posts by Innerglow Wellness

1 thought on “Grain-Free Vegan Everything Bagels”

This site uses Akismet to reduce spam. Learn how your comment data is processed.